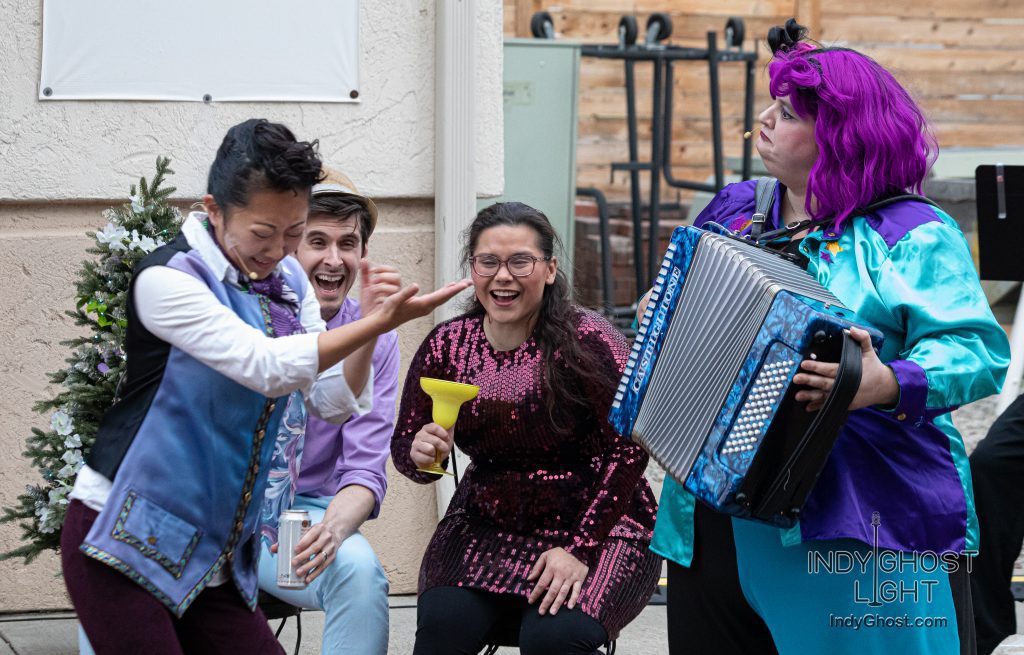 The reviews are in: Twelfth Night is a hit!

Producing live theatre was never easy, and producing musicals can come with even more difficulty, especially for smaller companies and startups. Theatre has also taken blows in the last two years, making it ever more difficult to create and produce live theatre. Despite this, Southbank blazed on with our joyous musical, Shania Taub’s Twelfth Night. Was creating a regional premiere of a Shakespearean musical easy in 2022? No. It wasn’t easy. But ‘easy,’ typically doesn’t come with the big rewards earned from the challenges of producing quality local theatre. When you make it to the finish line, and you see your hard work paying off, it helps to have accolades from local reviewers to reinforce what makes producing live theatre totally worth it.

Indy, thankfully, celebrates some terrific reviewers and our Twelfth Night has received some glowing reviews. We’re happy to share them with you and are thankful for our hardworking reviewers who take the time to remind us that the journey, although challenging is worth it! Here are some excerpts for you to enjoy!

“It was one of the most exhilarating afternoons of merrymaking I’ve witnessed in local theatre this season…Impressively directed by Max McCreary…Featuring a 14-member cast, the production boasts a uniformly talented ensemble of performers, with nary a weak link…the show’s exemplary creative team responsible for ‘Twelfth Night’s’ distinctive look and sound, includes music director Ginger Stoltz, choral director Brad Thompson, choreographer Dani Gibbs, and costume designer Casey Ross. I recommend you ‘hie thee hither’ to see this uplifting, exuberant reimagining of Twelfth Night.” – A Seat on the Aisle, Tom Alvarez

“[Paige] Scott is simply amazing, whether giving chiding counsel, a beautiful ballad, or some handy narration to the audience. Speaking of fools, [Hannah] Boswell is a riot in an arc that goes from bombastic to pathetic, but always fun. [Mark] Cashwell employs his improv skills and comic chops to great effect. [Dave] Pelsue has long cornered the market on cool-guy-who-can-sing, so is totally in his element. [Natalie] Fischer has the sweet/feisty mix down perfectly. And [Michelle] Wafford is endearing with an inner strength befitting the character. Everyone else? Awesome, awesome, awesome…” – Plays with John and Wendy, John Belden

“That theme of universal acceptance was given memorable permanence in an older rousing finale, the chorus that ends Verdi’s ‘Falstaff’ and points out ‘Tutti gabbati!’ (All are fools). In more forgiving guise [in Twelfth Night], the theme extends the sort of universal embrace that, by the laws of comedy, even severe killjoys like Malvolio can open their arms to. – Jay Harvey Upstage, Jay Harvey

Thank you for supporting Southbank as we embarked upon our first musical offering! We’ve loved bringing Twelfth Night to Indy, and we can’t wait to start the weekend for our last four performances! Join us — rain or shine! Tickets are at indyfringe.org! Play on!